Irresponsible drivers are putting learner drivers and instructors at risk. Here’s what’s happening and what Marmalade Insurance is doing to stop it. 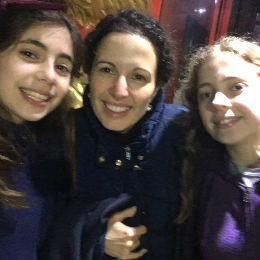 Up and down the country, learner drivers are having to deal with road rage aimed at them when they’re on the roads – and it’s got worse since the pandemic – according to 59% of driving instructors. Whether it’s in driving lessons or private practice, as soon as those L-plates hit the car, a number of fully qualified road users take this as a sign to hurl abuse at the learners.

A whopping 81% of learner drivers experience abuse or intimidation 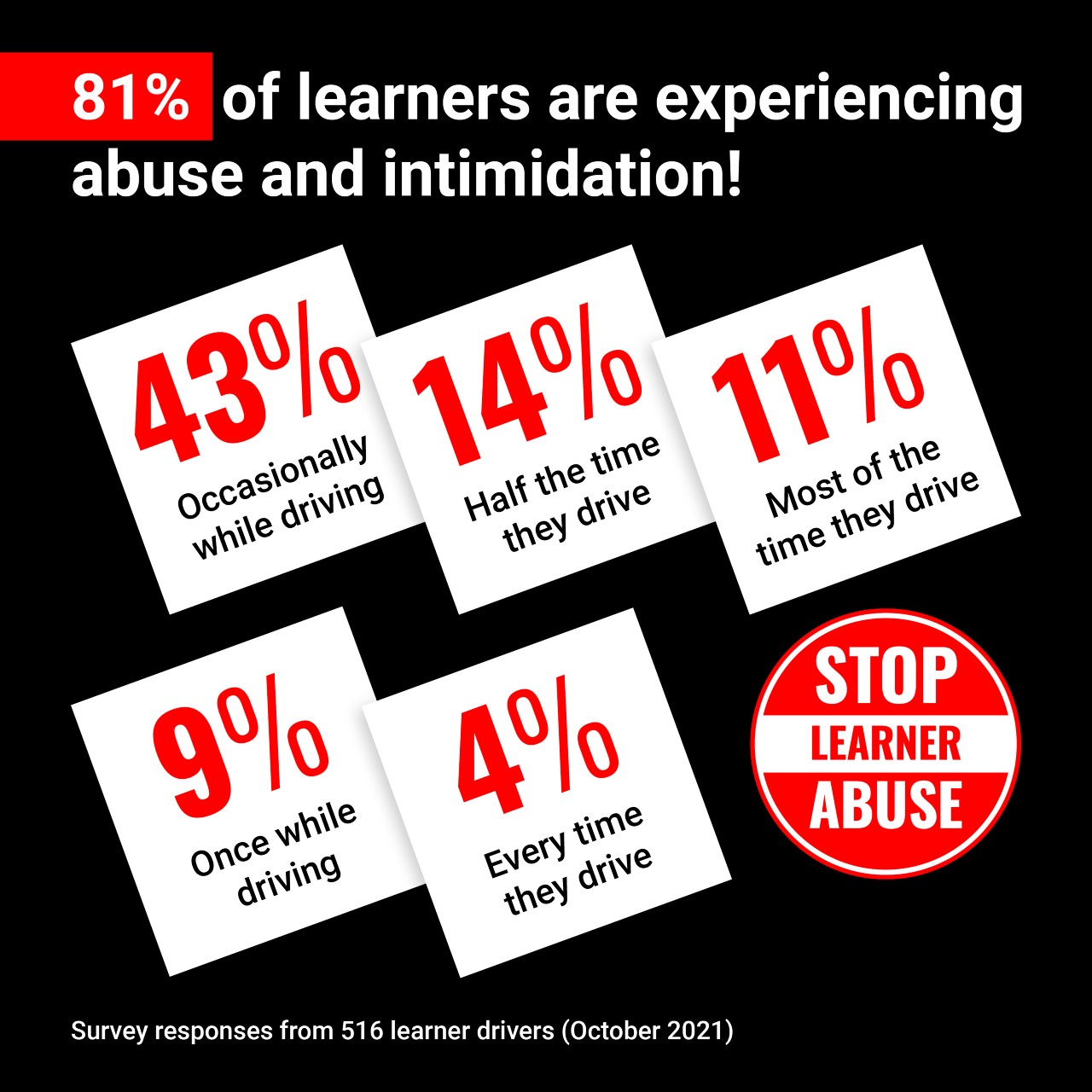 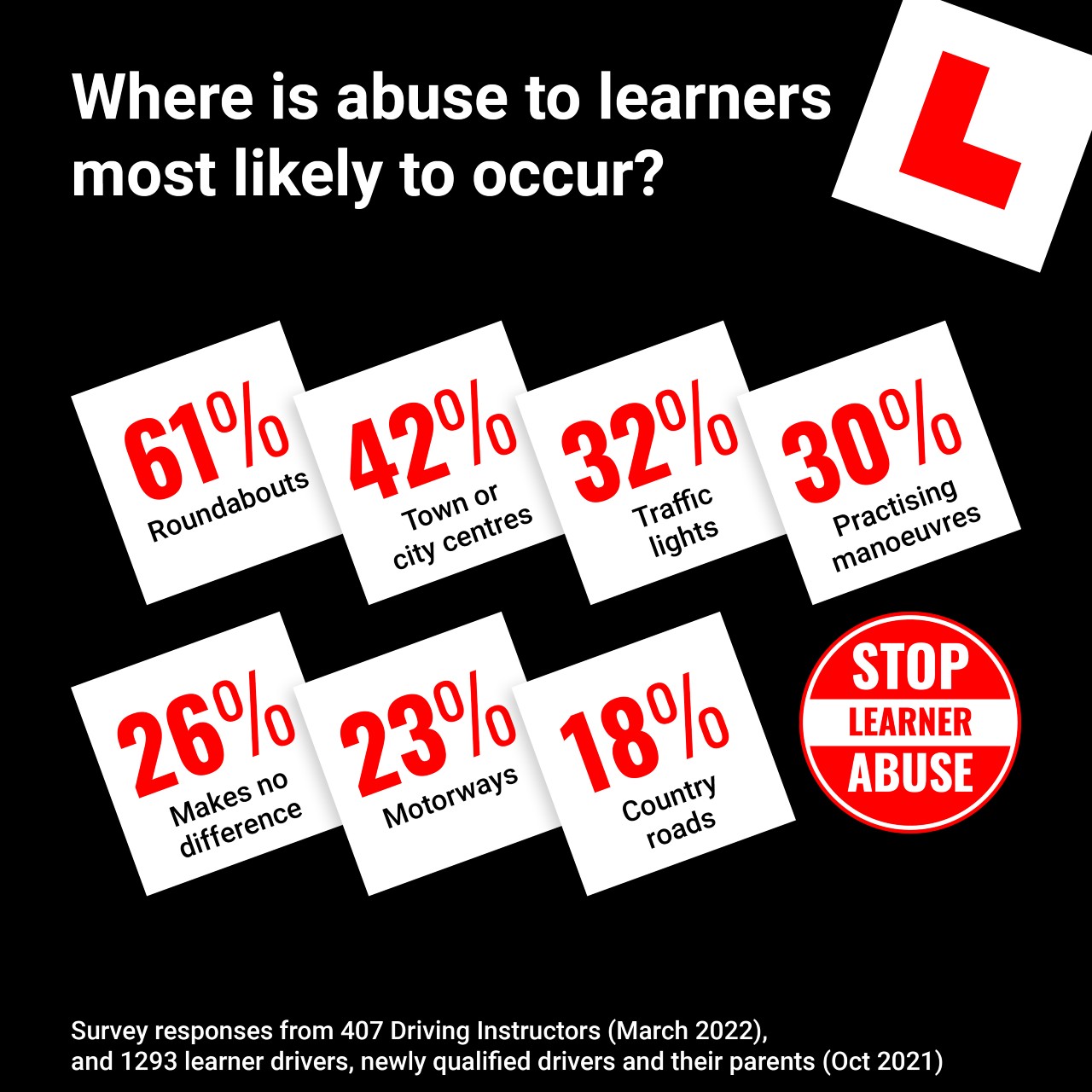 Roundabouts can be difficult junctions to get your head around, where quick decision making, concentration and caution are needed, so they can be really stressful when learning. Unfortunately, this isn’t helped by other road users, with 61% of learners reporting incidents at roundabouts and 32% at traffic lights.

“I was a driving instructor for several years and encountered this [intimidation] daily. I also got verbal abuse and rude hand gestures when my pupils stalled the car, especially at a roundabout or traffic lights.”

The impact of on-road intimidation and abuse 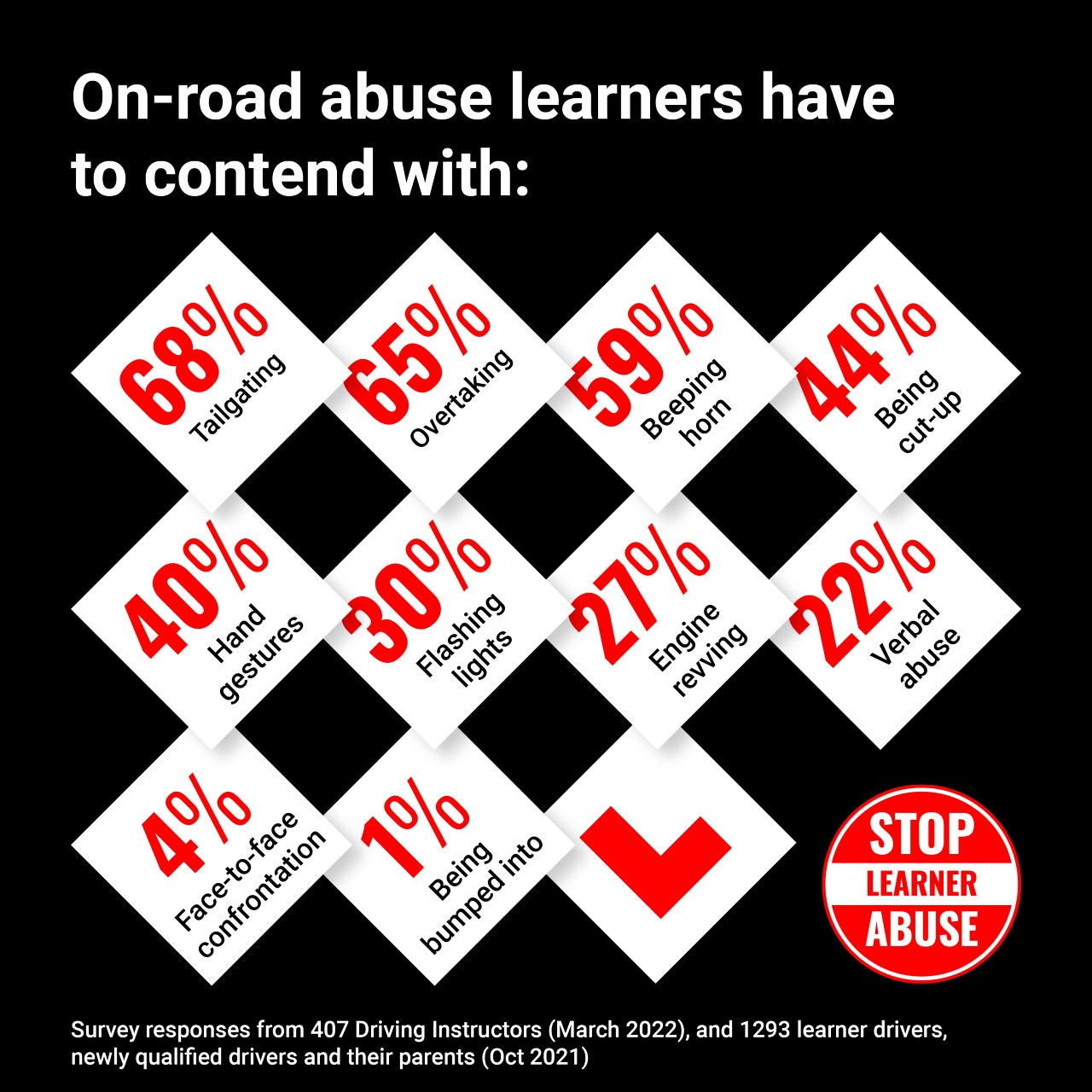 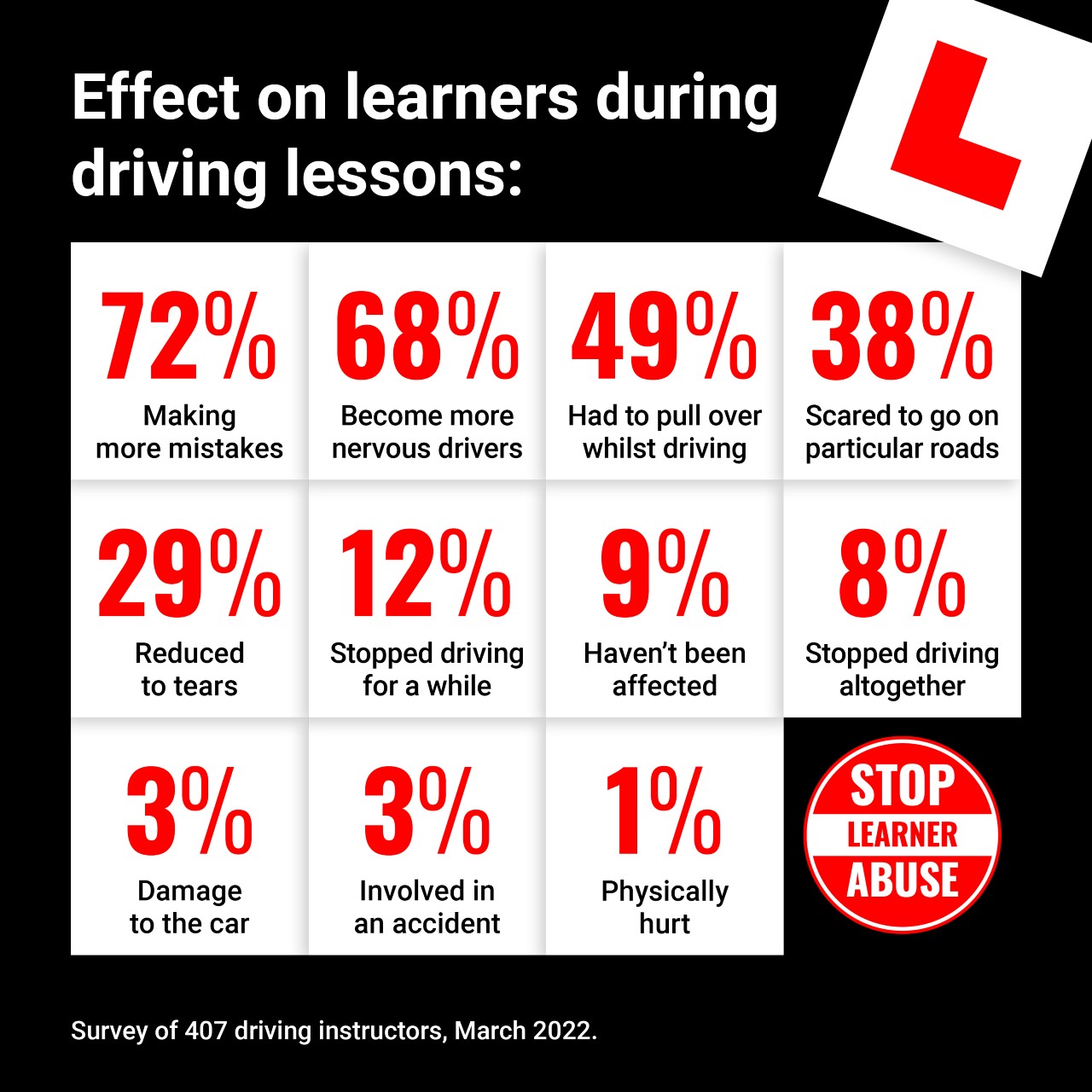 Some young drivers reported having their car purposely bumped and 4% had another road user leave their vehicle to confront them! Aggressive behaviours like shouting, swearing, revving the engine and cutting up all mentioned. Aside from causing learners to make more mistakes, these behaviours are making learners more anxious and nervous. Or as one of the learners surveyed said:

“Beeping at me isn’t going to make me recover from stalling any quicker!”

The majority of those surveyed (54%) suggested that they would support on-the-spot fines and more than a third 35% would support three penalty points. 50% felt anger management course for offenders would be beneficial, whilst others simply felt more should be done to raise awareness of the issue.

Our research found 72% of instructors are in support of learners having their own category or special mention in the Highway Code hierarchy of road users.

Here at Marmalade we support harsher penalties, and believe that more needs to be done to deter dangerous or careless driving around a car displaying L-plates.

Learners deserve to have the right to drive without intimidation – so we’ve launched a petition to call on the Government to do more to prevent road users bullying drivers with L-plates by introducing measures to impose stronger sentences on drivers who drive carelessly or dangerously around learner drivers.

Sign the petition today and let's make this happen!

What else did our research find?

Results suggest that males aged 30-39 rank as the biggest culprits for bullying behaviour, with 67% of learners identifying this age group, while 68% said men in general were most abusive on the roads. In terms of vehicles, behind cars, 61% said abuse came from those in vans, while 23% said taxis. 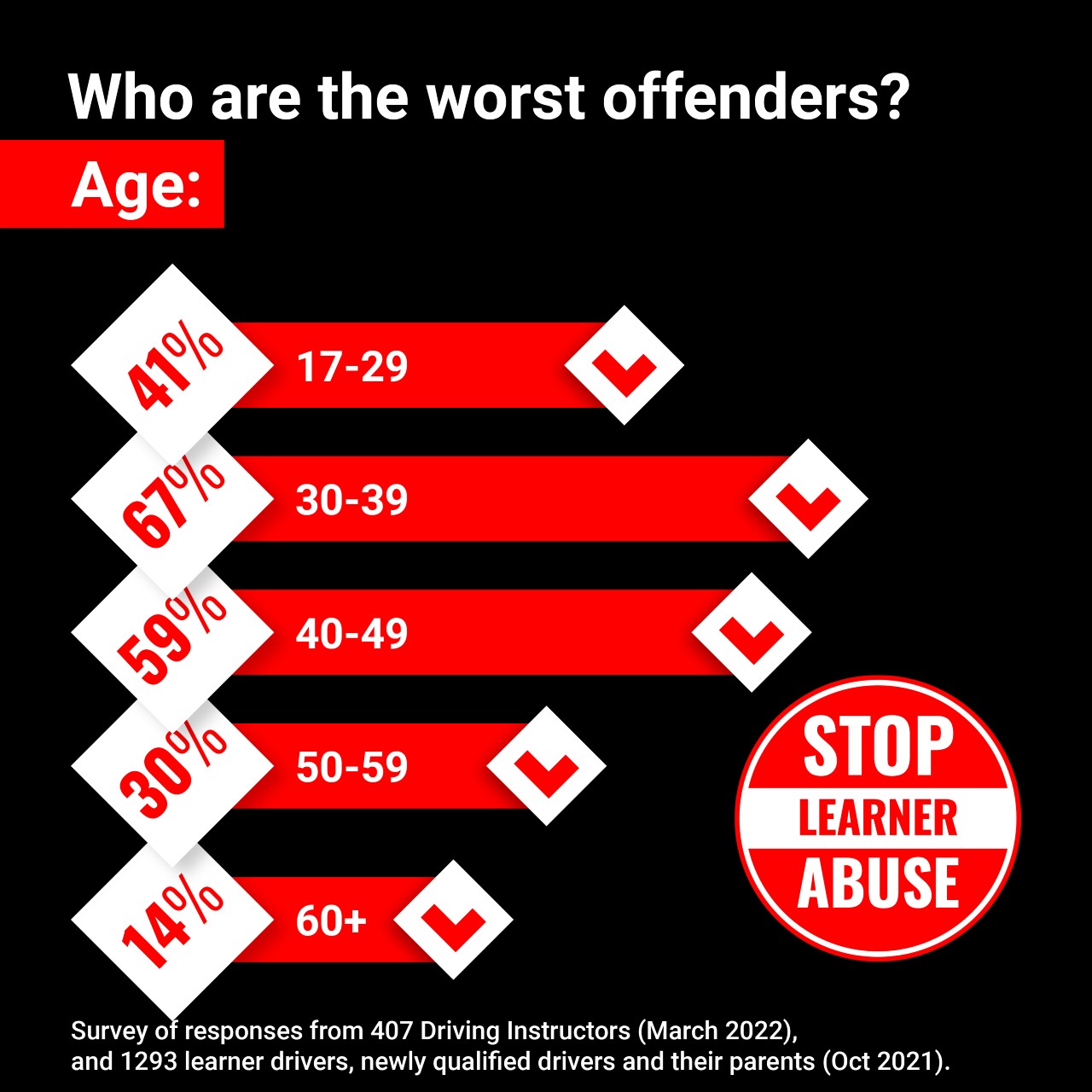 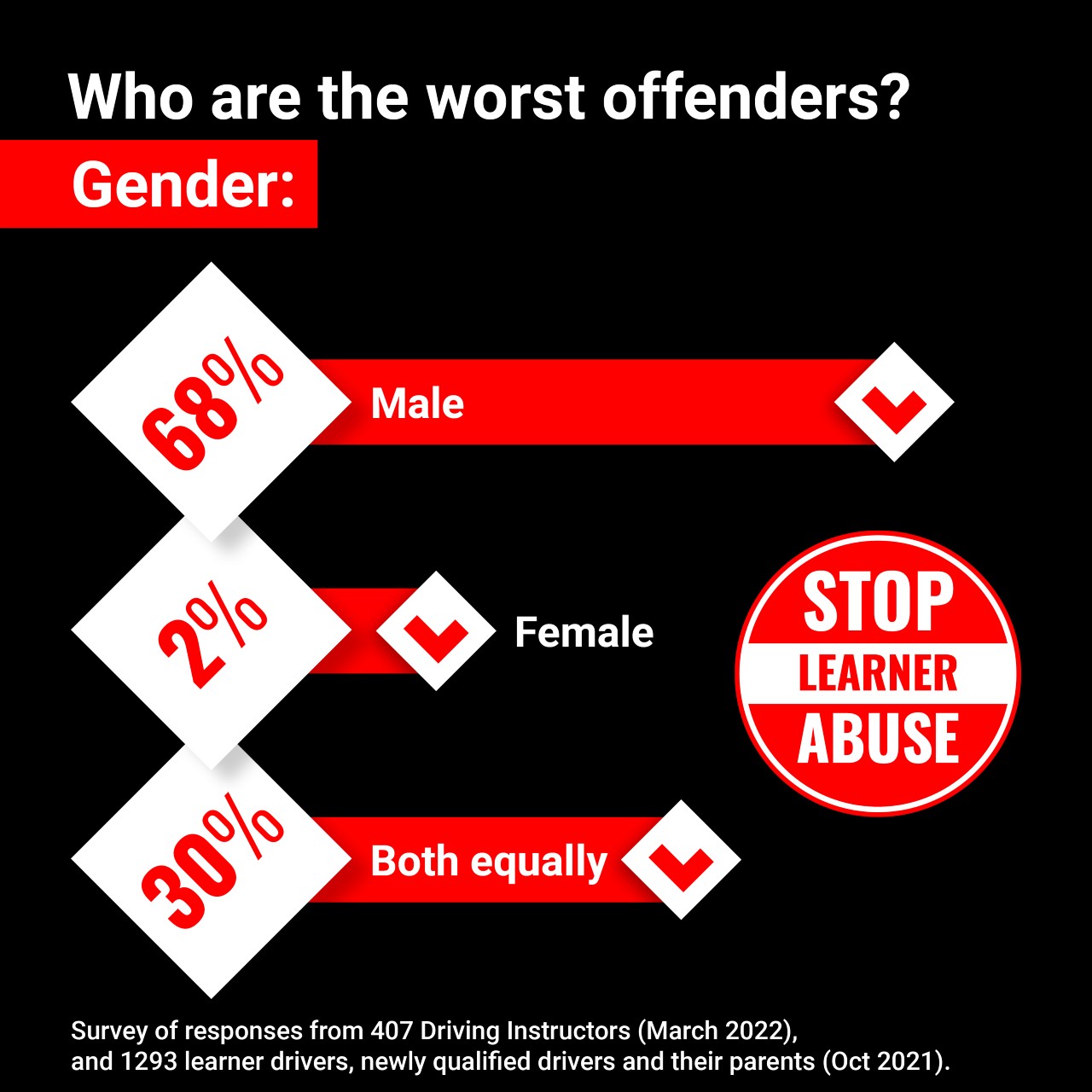 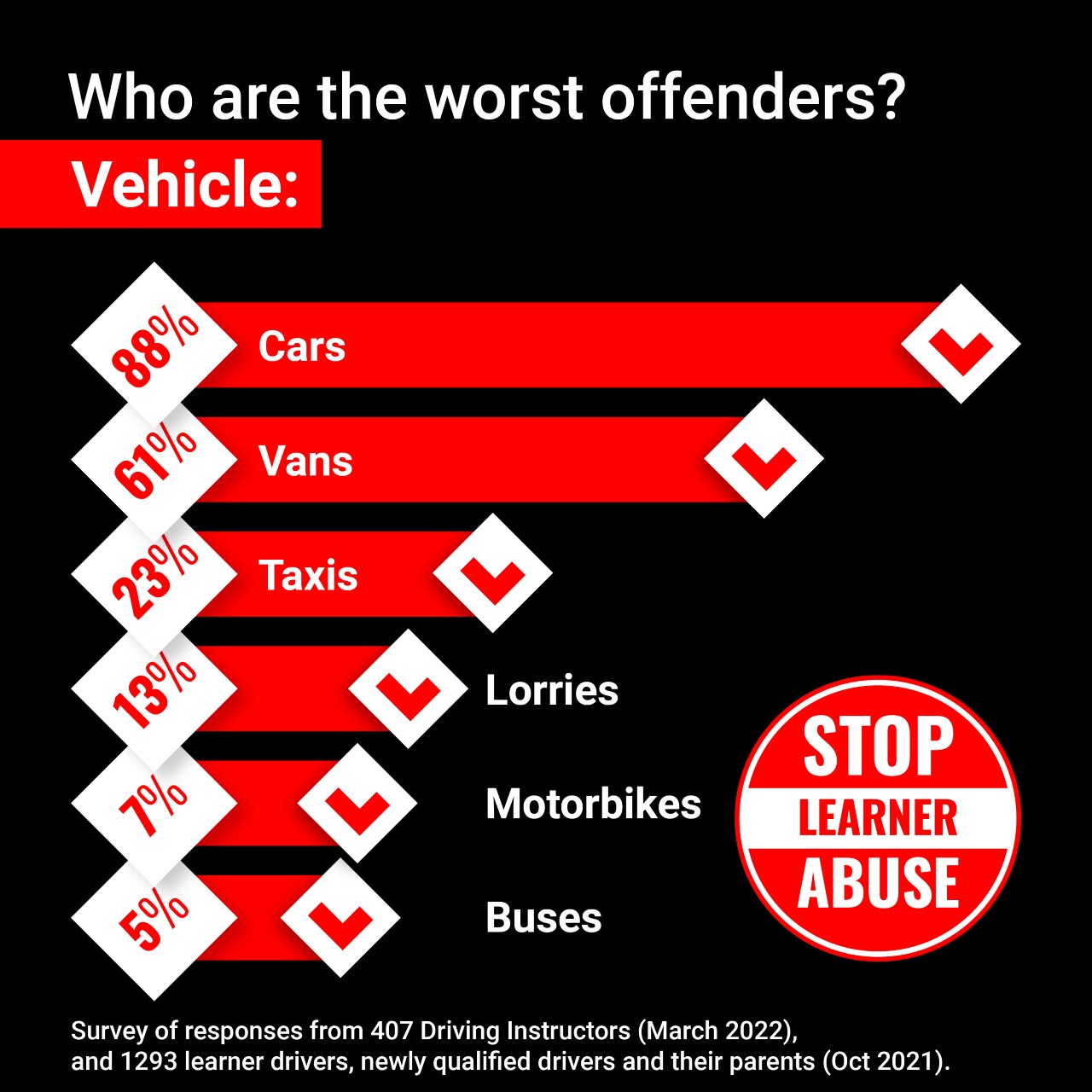 What about P plates?

Only 30% of newly qualified drivers said that they used P plates when they first passed. Nearly half (47%) of new drivers said one of the main reasons for not using them was so as not to be victimised by other drivers. In fact, nearly half of instructors (46%) advise their students NOT to use P-plates when they pass!

Of those new drivers that used P plates – 50% said they did receive abuse on the roads. One parent said:

“The worst tailgating my daughter experienced was after she passed her test and used P plates. It was so bad that I told her to remove them, as it was almost like a challenge for other drivers to harass.”

Learners in London suffer the most frequent abuse

Our analysis has also revealed there is a marked difference in the level of abuse and intimidation learners suffer depending on where they live in the UK.

London was found to be the most hostile place in Britain to learn how to drive with almost one in 10 (9%) experiencing abuse every time they drive. Learner drivers in the East and West Midlands also suffer regular clashes on the road with 6% of learners in each of these regions noting abuse and intimidation on each occasion they get behind the wheel.

In contrast, learning to drive in Northern Ireland is a far more pleasant experience with almost a third (28%) of learners never experiencing any form of abuse. The North of England was also found to be a welcoming place for those getting to grips with their hill starts and parallel parking with more than 20% of learners based in the North East, North West and Yorkshire & the Humber never experiencing abuse or intimidation, however while these are small positives the issue is still very much apparent in all areas.

Learners say that both men and women in London are equally guilty of intimidating learners. London also has one of the lowest incidences of taxi drivers intimidating learners but much higher rates of van drivers than the rest of the UK. Our survey didn’t specifically touch on makes of car, but BMW drivers were mentioned without prompt.

We spoke to driving instructor Linda Ball who says the abuse given to learners has increased since the pandemic:

A recent example of intimidation is when I'd asked a pupil to stop on the left in a safe place. Another motorist took exception to this, pulled alongside and shouted through his window that my pupil was a f****** idiot for stopping there. He then stopped in front of us, so we had to consider going around him, but he pulled away laughing and waving. My pupil went into a meltdown, she couldn't believe that anyone could be so nasty to her.

Following the incident and with her test a couple of days later she felt she no longer wanted to drive and taking the test would be pointless. On the way to her test she needed lots of reassurance and with her agreement I mentioned to her examiner what had happened in case she became nervous of stopping on her test. Thankfully she went on to pass despite the ordeal.

On how the lockdowns and the pandemic overall has changed the way drivers behave towards to learners, Linda said:

Pre-pandemic, I had maybe one to two issues with abuse per day now it's one or two times per lesson. Unfortunately this abuse is all too common.

I would have loved to have been surprised about Marmalade's stat of 81% of learners receiving abuse, but unfortunately I'm not. I was out recently for six hours teaching and in each lesson I received abuse, unfortunately the dangerous one was in the dark and my dash cam didn't pick up the reg number of the overtaking car.

I feel there should be a tough consequence for drivers abusing learners, it's surely time for there to be an offence of learner intimidation or dangerous driving around a learner, with points or a fine being imposed. If another driver causes a learner to have an accident, the abusing driver needs to be held responsible for the accident.

Linda’s advice to other road users that might choose to intimidate a learner driver:

If you harass a learner driver, upset them, tailgate them from behind, all you're doing is delaying yourself. Please give learners space, your journey will be quicker and less stressful for you if you do. Everyone has a right not to be abused at work, by abusing my pupil you're ensuring that my place of work is an abusive one. You’d be wise to remember that most driving instructors have dash cams and you're likely to appear on footage that's sent to the police.”

For other instructors in the same situation or those yet to experience it, Linda said:

Get a dash cam. Don't react or appear to react, get out of the situation and take some time to go over what has happened and maybe contact the police. Obviously the police may need to be called in emergency situations. Above all else in these situations to keep yourself and your pupil safe. Also remember the abuse isn't personal, it's directed at the L plate and the perception that people have of learner drivers.

Chloe Hutchon, a learner driver from Fife says the abuse she received while learning knocked her confidence and stopped her from driving for over a year:

As a learner driver I’ve had numerous experiences of abuse whilst learning to drive, which really knocked my confidence and left me feeling quite nervous and full of dread.

The most damaging experience was when I accidentally took the wrong exit off a busy roundabout. I had my test coming up so I was particularly nervous and made an easy mistake, but the driver behind me responded in such an abusive manner it really shook me. The driver took the same exit as me and sounded their horn for a good 40 seconds whilst driving extremely close to me and shouting verbal abuse. I was so upset by the incident and the sound of the horn was so loud that I couldn’t stop crying.

The shame and embarrassment from that incident along with general driving nerves gave me anxiety and can still put me in a bad mindset behind the wheel which can lead to more driving mistakes.

I started to learn to drive when I was 17, but as an extremely nervous driver and the anger I was subjected to as a learner really put me off and I would dread every lesson. I stopped learning to drive for a year, tried again at 18 and hated it even more, especially when we would go to the busy, more built up areas so I gave up again. I finally decided to push myself after Covid to get my licence, and here I am, 23 years old, with a driving license after 7 years of anxiety.

Chloe’s advice to other road users that might choose to intimidate a learner driver:

For other learners in the same situation or those yet to experience it, Esme said:

If you’re feeling disheartened by the abuse from other drivers, please don’t give up. Don’t be shaken by the other drivers on the road and communicate with your instructor if you are feeling particularly upset or nervous about other driver’s behaviours. Your confidence will build with time and experience and it’s extremely unlikely you will ever see the abusive driver again, therefore it’s not worth not getting your license for, as that’s the best feeling in the world.

HELP PUT A STOP TO ABUSE

Learners deserve the right to drive without intimidation – so we’ve launched a petition to call on the Government to do more to prevent road users driving dangerously around drivers with L-plates.
Sign the petition

Hear real life stories from learner drivers and their instructors, dealing with abuse on the roads. Sign our petition today and help us put an end to this bullying.

Driving practiceDealing with road rage as a learner driver

Learner drivers up and down the UK have to deal with abusive behaviour from other road users. Here's how to stay calm and stay safe behind the wheel.

How to handle road rage

Exclusive instructor tips on handling aggressive behaviour from other drivers to help you stay calm,