We're answering the most common questions about smart motorways in the UK!

We’ve been seeing more and more smart motorways in the UK recently, yet many of us are still asking ‘how do smart motorways work?!’ In October 2019, it was revealed by Highways England, smart motorways would be increasing by more than 300 miles by 2025 so it’s very important we all get to grips with how they work now as more are on the horizon. Drivers have a lot of questions about smart motorways - so we’re here to answer them!

What is a smart motorway?

Those big signs hanging over your head as you’re driving along? Pay attention to them, because they’re letting you know which lanes you can and can’t drive in. They may also change the speed limit, so whilst the national speed limit is 70mph on a motorway, it could be reduced to avoid stop-start driving conditions on the motorway.

How do smart motorways work?

In short, the technology for smart motorways (which is controlled by regional centres) is used to manage the flow of traffic on a motorway. So how do smart motorways prevent traffic from building up? Well, when there are signs of congestion, the hard shoulder will open up as an extra lane and there will be variable speed limits in place to keep traffic moving smoothly.

So what are the different kinds of signs you can expect to see on a smart motorway?

Driving on a smart motorway is no different to driving on a normal motorway in terms of the law, there are just more cameras and variable speed limits on smart motorways, which means motorists are more likely to get caught if they are breaking the law.

If you see an X, it means the lane is closed and you cannot drive in it. If you do drive in a lane you shouldn’t be, smart motorway cameras have been upgraded meaning it is more likely to catch you in the act - and it won’t be cheap either. If you’re caught, the smart motorway speeding fine could be £100 and see you get 3 points on your licence. 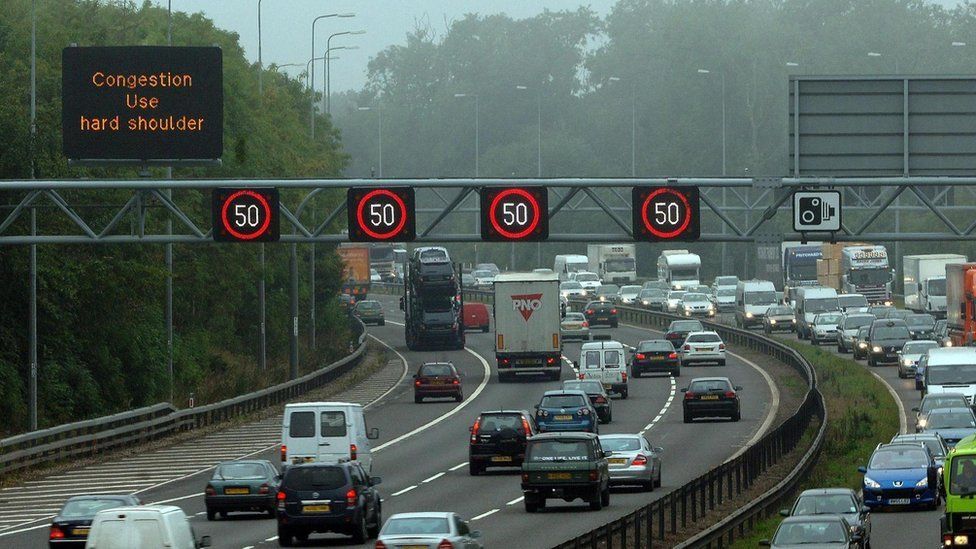 So what’s the aim of a smart motorway? Well, it’s to keep traffic moving and to keep everyone safe. You’re less likely to have an accident with another moving vehicle than you would on a conventional motorway.

Many still ask if smart motorways are dangerous, and whilst they are designed to help keep drivers safer on the roads, there is a risk of live lane collision between a moving and stopped vehicle. Another downside is that because there is the constant use of the hard shoulder, it could prevent emergency vehicles from making their way through traffic in urgent cases, like police cars and ambulances for example.

How do smart motorway cameras work?

The cameras on smart motorways are set to the national speed limit by default but change according to the variable speed limit that may be put into place. There’s a bit of a delay between when the speed limit is changed to when the cameras will begin enforcing that speed, giving drivers time to slow down to the new speed limit at a sensible rate.

·       Keep to the smart motorway speed limit (obviously), and be aware it may vary depending on driving conditions

·       If you have car trouble, or any warning lights appear when you’re on a smart motorway, exit as soon as possible.

·       A solid white line separates the hard shoulder. Unless directed to, you can’t drive on here.

If you’re driving along a smart motorway and your vehicle becomes damaged or you experience difficulties, you will need to stop in a safe area. On a smart motorway, chances are there will not be a hard shoulder, or if there is – it will be open to traffic, so you will have to find the safest place you can to stop.

·       Use an emergency refuge area (ERA). They’re spaced regularly along a smart motorway.

·       If you can leave your car, use the roadside emergency phone to contact Highways England.

·       If you can’t make an ERA, try and move your vehicle to the hard shoulder, or as close to the verge as possible.

It's super simple to get a quote on Marmalade's Black Box Insurance!
Join thousands of young drivers enjoying comprehensive cover with no curfews or night-time driving restrictions
Find out more

Find out what the new drivers we surveyed said they are least confident about, and what you can do if you have the same fears!