One of Chloe's biggest fears when driving is roundabouts - she's here telling us all about why she hates them so much!

My biggest fear as a learner is roundabouts

Marmalade's very own Social Media Exec, Chloe, is having to try and overcome her fear of roundabouts, as she learns to drive.

Roundabouts – why do they make me so nervous? If anything, they should make everyone's lives easier out on the road. They're a fair way to keep the traffic flowing and to help keep journeys moving forward. So why am I so scared of them!?

"If you hit the roundabout, the car will flip over and you'll crash"

Throughout my whole life (or at least as long as I can remember) roundabouts have always filled me with dread – even as a passenger! I think I may have watched too many high-speed chases in films, or playing GTA a bit too much, but I can’t help that feel that if you even slightly clip the curb of the roundabout, the car will flip over! Now I know deep down this is very unlikely to happen, unless you’re driving at a ridiculous speed, but the nerves set in every time I approach one.

Surprisingly, being behind the wheel and in control of the car has actually helped with this fear! I know I’m in control, and I can clearly check all of my mirrors and windows to know I’m not too close.

Ok, this is something I am still struggling with. Which lane do I need to be in at a roundabout? I know that anything past 12 o’clock, is the right-hand lane, but a lot of roundabouts I seem to come across are so much more complicated than the standard one you’re shown to help you visualise it. Lucky me, ay?

I am getting better with knowing the lanes around where I live on my driving lessons, but I still find myself going into a moment of panic and borderline screaming at my driving instructor ‘IS THIS CORRECT?’ whilst approaching it – not ideal, I know! 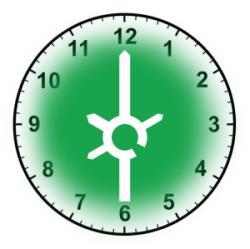 If we all used the same rule of thumb at roundabouts, like the lane position and giving way to the right, then there would be next to nothing to worry about, however, I know that is not the case.

My first driving lesson on roundabouts was a nightmare, and I was already worried enough as it was!

As I approached the roundabout, it split into 3 different lanes. I was heading straight over, or just past 12 o’clock, so was advised to be in the middle lane to go around it – great, I thought, that’s easy enough. Unfortunately, upon pulling out on to the roundabout, a driver in the left-hand lane decided he also wanted to go the same way as me, and almost drove straight into the side of the car! I was so nervous, and worrying about everything - from time to pull out, to my lane position, that I had no idea he was there until my driving instructor had slammed the brakes on. It all happened so quickly, that there was no time to put the clutch down, and the car stalled!

Once I got the car started again, I managed to make my way off of the roundabout to where I was going, and pull up in a lay-by to catch my breath. My biggest worry at this point was that I had no idea what had actually happened, and I thought it was all my fault! My driving instructor calmed me down, and drove me home (which is good, because I couldn’t stop shaking)! I even managed to put on a brave face until I had to tell my Dad all about it, then I started crying!

It was a very scary experience and it almost stopped me from wanting to learn to drive altogether. However, I know it isn’t uncommon and I knew that everyone would have to deal with something similar from time to time - so I couldn't let this keep me down. I now find myself being extra vigilant at roundabouts and taking my time to get around it.

Even though I had a pretty scary experience on my first attempt at roundabouts, I didn't let it put me off (as much as I wanted to). I knew I had to dust myself off and get over it because, unfortunately, things like this and much worse happen out on the roads every day. This particular driving lesson taught me more than just how to drive around a roundabout - but how careful you really need to be behind the wheel. If my instructor hadn't spotted the other driver, there is no doubt we would have crashed. Now, I’m the one checking my mirrors and surroundings like a maniac, but I’d rather be safe than sorry!

The stress of driving

As a learner (and an all-around paranoid parrot), almost everything about driving makes me nervous. There are a million questions and nerves every time I get behind the wheel in my driving lessons. I know that these feelings will fade within time, and it is said that you only truly start to learn once you’ve passed – but until then, I’ll keep at it!

Is there anything about roundabouts that make you nervous, or have you had a bad driving experience like Chloe's? Let us know over on our Facebook page!

Driving practiceHow to deal with roundabouts

In this episode of the Masterclass Series - we're giving you some driving tips on how to deal with roundabouts!

Driving practiceTop 8 drives to do as a learner