For new drivers who are involved in car accidents, hearing first hand stories can help! Here's what happened when Liam was involved in a crash. 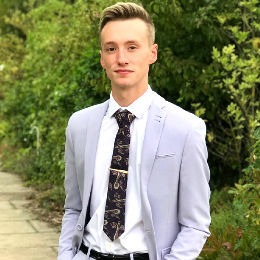 HomeDriver HubDriving TipsI was involved in a car accident!

Hi there! My name is Liam, I am a 20-year-old food technologist and I have recently moved to Lincolnshire from Suffolk for a new job. As this new job is based on a farm, I made the decision to upgrade my hatch back to a 4x4 to help get me around the country roads as well as the farm. Less than a month after getting my nice brand-new Seat Ateca Xcellence 4Drive, I was involved in a road traffic accident…

It was a Saturday morning, I was on my way back to Suffolk to visit my parents and was only 20 minutes into a 3-hour journey. It happened at a roundabout: I was in the left-hand lane going straight over and the other driver was in the right-hand lane, as we were going around the roundabout, he lost control on some ice and slid into me, leaving my car with a huge dent along the driver’s side doors as well as damage to the frame work. Luckily, no one was injured and both cars were drivable.

Upon being struck, because it was such a shock I slammed on my brakes and checked my mirrors to see who had hit me and saw that the other driver had completely spun out of control - luckily he didn’t hit anyone else. I got out of my car as the other driver pulled up behind me and he immediately apologised, and said it was his fault. We pulled into a quieter road so that we could exchange details and insurance companies. As both cars were drivable, we exchanged phone numbers and license plates and went our separate ways.

I immediately called my insurance company to get advice on what to do as I had never been involved in an accident before, and they told me to go home and have a cup of tea as I was probably in shock. Before I went back to my house, I called my parents to tell them I would be late because someone had driven into me, and both of them were immediately panicking and telling me they would come pick me up despite being two and a half hours away, asking if I was injured and all the other, standard ‘concerned parent’ questions. When I got home I did just that, made myself some tea and called my insurance company again and we went through all the details of the other driver. At that point, I had to pay my excess because the other driver hadn’t officially accepted fault yet, but luckily after about a week his insurance company contacted me accepting liability and told me that they would organise for the repairs on my car, a hire car as well as telling me they would waiver my excess. I also had the benefit of legal protection, so felt completely safe and covered should anything go wrong. About a week and a half after the accident, the hire car was delivered to me and my car was picked up to go in for repairs.

In terms of injury after the accident, although there was no immediate injury I did suffer from stiffness and pains in my neck and back, at which point I was advised by my solicitors to see a physiotherapist. In my first appointment, I had acupuncture which really helped with the movement in my neck (I didn’t realise how restricted my movements were until after acupuncture!). But I feel much better now after physio. It just goes to show than injuries aren’t always apparent in the first instance.

After the accident, my confidence while driving did seem to dip, and is still at a bit of a low - which is a shame because I drive a LOT for both personal and work reasons (what makes my nerves peak while driving for work as well is that I use my boss' super expensive, very powerful car! I also have flashbacks every now and then while on a roundabout - it feels almost the same as when something makes you jump and you have a surge of adrenaline, like a mild fright and there is about a second where all I can see is where I was when the other car crashed into me, which causes me to gasp a little and grip the steering wheel really tight.

Advice from one driver to another

My advice to anyone involved in a car accident (hopefully it would only be a relatively minor one) would be to collect the first and last names of the other driver, their insurance details, the registration, make, model and colour of their car, as well as their phone number. Something else I would advise, and yes, I know I sound like a concerned parent myself, is to please be careful in winter weather and icy conditions. If you haven’t been driving for very long and would not be comfortable driving in certain conditions, then don't risk it - wait until you're more confident!

I'm Liam and I passed my test when I was 17. Learning to drive was the best decision I have ever made as it has given me so many opportunities for my career! I recently started a new job, which meant moving away from home and I couldn't have done it without being able to drive.

You passed your test! But now, the first independent drive is looming - here's how to be a confident driver and get over those driving nerves!

There's no shame in being a nervous driver - even after you've passed. Meg is, and here are her top tips to help!